Apple stock is picking up a head of steam on demand for its new products, but antitrust concerns over the Apple App Store could throw cold water on the company’s mood when the new year comes around.


Regulators in the U.S. and Europe say Apple (AAPL) wields too much power over smaller companies with its App Store policies, including the so-called “Apple tax.” That’s the 30% commission the App Store takes on sales of software and digital services that run on iPhones and other Apple devices. Some critics want the App Store separated from the consumer electronics icon. And now Apple faces an incoming U.S. president who’s expected to step up scrutiny of big tech.

Apple hoped to appease Washington last month by halving fees for some small software developers to 15%. But the new App Store Small Business Program will have minimal impact on Apple’s top and bottom lines, analysts say. And Wall Street is skeptical the change will take the pressure off the company. Analysts say companies that qualify for the program — small app developers that earn less than $1 million a year from the App Store — only account for about 5% of App Store sales.

Apple said the discount “will benefit the vast majority of developers who sell digital goods and services on the store.” The company did not quantify that statement and declined a request for an interview.

“The move is a positive in terms of optics as the program is specifically designed to support small businesses,” Daryanani said in a recent note to clients. The program “will make a good sound bite the next time (Apple Chief Executive) Tim Cook is brought in front of Congress or in a courtroom.”

Apple Stock Swims Along, But Troubles Ahead

Apple shares have perked up recently. Reports on Dec. 15 said Apple hiked its production orders for next year for iPhones and Mac computers, following a “major holiday season” for Apple products. That was enough to make Apple the IBD Stock Of The Day.

But the same day, the European Union targeted big tech companies with proposed bills that would empower regulators to levy fines of up to 10% on their worldwide revenue or break them up. The U.K. is proposing similar legislation.

They’re following proposals by U.S. lawmakers that hone in on Apple.

In October, the antitrust subcommittee of the U.S. House of Representatives called out Apple’s App Store in a 449-page report on Big Tech. The report said Congress needs to broaden antitrust laws for the digital age to combat unfair business practices by giant tech companies such as Apple, Alphabet‘s (GOOGL) Google, Amazon.com (AMZN) and Facebook (FB).

In its Oct. 6 report titled “Investigation of Competition in Digital Markets,” the House panel called Apple a monopoly. It suggested splitting the App Store from Apple under the structural separation remedy in antitrust law.

The subcommittee described Apple’s App Store revenue share as exorbitant. It also said Apple has abused its App Store manager role by copying top-performing apps to launch its own versions. Apple gives preferential treatment to its own apps, such as Apple Music, the panel said.

President-elect Joe Biden is expected to turn up the heat on Big Tech as well. That became clear last month when Biden named a number of tech executives to his transition team but left off anyone from Apple, Facebook or Google.

With Congress likely split between a Democrat-controlled House and Republican-led Senate, Biden will need bipartisan support for heightened antitrust enforcement.

But Apple is being targeted within the industry as well. App developers such as Epic Games, Match Group (MTCH) and Spotify Technology (SPOT) have banded together to form an advocacy group called the Coalition for App Fairness. The group is seeking reform of the Apple App Store and other app stores that follow its lead, such as Google’s Google Play store.

“Our goal is to lend a voice to app developers all over and advocate for a level playing field,” said coalition spokeswoman Sarah Maxwell.

Other Fallout From App Store Policies

The conversation about app store policies is affecting other tech companies. On Oct. 8, Microsoft (MSFT) announced a set of 10 principles for its Microsoft Store that builds on the work of the Coalition for App Fairness. The principles aim to promote choice and ensure fairness on the Windows 10 platform, Microsoft said.

Apple insists it’s not a monopoly since its iPhones compete with smartphones running Google’s Android operating system. The two companies are a duopoly, accounting for the operating systems that run more than 99% of smartphones in the U.S. and worldwide. In the U.S., Apple is the leading smartphone vendor, with about 45% market share.

The congressional subcommittee said Apple and Google have “durable and persistent market power” because of “high switching costs” for consumers. As a general matter, consumers rarely switch mobile operating systems, it said.

The House subcommittee argues that antitrust laws too narrowly focus on “consumer welfare.” The lawmakers recommended that Congress consider antitrust legislation that protects entrepreneurs and independent businesses, not just consumers.

Apple says its App Store fees are standard in the industry. However, Apple established the App Store business model in 2008, prompting Google and others to follow its lead. Google charges the same fees as Apple.

The company notes that it only collects fees when there is a charge for an app. Providers of free software available on the App Store pay no commissions or fees, and they comprise 84% of all programs distributed through it. Apple also doesn’t take a commission on purchases from apps like Uber (UBER) and Etsy (ETSY) that sell physical goods or services consumed outside the app.

Not all observers say Apple is simply throwing a bone to its critics with its latest App Store changes.

Apple says software developers and services must abide by its take-it-or-leave-it rules. Those rules include banning companies from pointing consumers to alternative payment methods to avoid paying the 30% fee.

Amid continued criticism, Apple made another concession on App Store fees on Nov. 23. It announced it will waive App Store policies regarding alternative payment methods for apps offering online group events and digital classes through June 2021, citing the ongoing Covid-19 pandemic. In September, Apple had waived the policies through Dec. 31.

Apple previously required that app developers offer such online group events and classes as in-app purchases and pay a 30% commission. It extended the waiver because the continuing health crisis is preventing in-person events, the company said.

The temporary change will allow those services to charge their customers directly and avoid Apple’s 30% commission fee.

The speculation about possible regulatory action against the App Store has been a drag on Apple stock. It had been trending mostly sideways for the last four months, until recently.

Apple now admits that regulatory and legal challenges to its App Store rules represent a threat to its bottom line. In an Oct. 30 filing with the Securities and Exchange Commission, Apple broadened its risk factors. They include potential adverse implications from heightened legal and regulatory investigations.

The company said its “financial condition and operating results could be materially adversely affected” if Apple reduces the App Store commission. 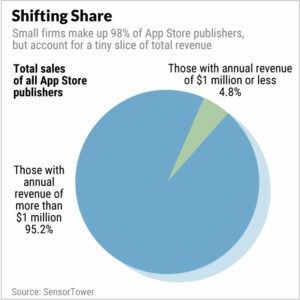 “While this action suggests Apple is trying to appease lawmakers and app developers, we see this move as the opening of Pandora’s box as why should just software developers with less than $1 million in sales benefit from lower fees,” Gastwirth said in a note to clients. “Now that they declared a 15% fee for some, it will be hard for Apple to defend its decision to have a bifurcated pricing structure.”

Apple stock analyst Katy Huberty of Morgan Stanley says the lower commission rate for small developers will be “immaterial” to Apple financials. “The vast majority of App Store revenue is generated by the largest developers,” Huberty said. She rates Apple stock as overweight.

The top 1,500 developers on the App Store have generated 91.7% of total revenue on the platform. That amounts to $40.3 billion post-commission, year to date, Huberty said in a report. The largest developer, Tencent Mobile Games, has accounted for 8.8% of all developer post-commission revenue. That translates to $3.86 billion year to date, according to Sensor Tower data.

Apple stock analyst David Vogt of UBS calls the App Store fee reduction “an olive branch.” It’s not likely, however, to dissuade regulators from their investigations, he says.

“Although Apple recently announced a token commission reduction, in our view, for small businesses, investors should be hyper-focused on the European Commission investigation into Apple’s business practices and in-app purchase system,” he said in a note. Vogt rates Apple stock as neutral.

Along with charging for downloads of paid apps, Apple and Google charge a 30% fee for transactions called in-app purchases. For subscription services, the commission is 30% for the first year. It’s 15% for the second year and thereafter. The fees apply to subscriptions to news apps and streaming media.

Some developers have argued in favor of allowing trusted third-party payment processors like PayPal (PYPL), Square (SQ) and Stripe to compete in the App Store.

Fees at the Apple App Store are much higher than those charged by credit card processors, which average about 3%.

Apple says its control of the App Store allows it to ensure that apps meet its high standards for privacy, performance and security. It claims that distributing software via app stores has lowered customer acquisition costs for software developers.

But those statements sidestep many of the criticisms of the App Store, says Maxwell of the Coalition for App Fairness. Apple has made only minor changes to App Store policies over the past decade, she said.

“They haven’t really made meaningful changes in the 10 years since they first started,” Maxwell said. “All marketplaces evolve.”

Is Apple Stock A Buy Right Now? Here’s What Its Stock Chart Shows

When To Sell Growth Stocks: This Could Be Your No. 1 Rule

Get Stock Ideas From IBD Experts Each Morning Before The Open

Diamondback Energy to Buy QEP and Guidon for Combined $3 Billion