Yes I did… I had written Market Recon. The editorial staff had the piece. I saw the news. Stunned, though I don’t know why. The shares had been on a tear, up more than 12% over just the past three days. Monday’s closing price was another all-time record, leaving the corporation with a market capitalization of $608 billion (The 6th most valuable U.S. company). I waited. I watched. A little after 7 am, I sold my Tesla (TSLA) . All of it. Not my style? Nope. All in and all out are not my style. That’s okay, this is a trade. I don’t know when I’ll start buying back this position. It could be today. All I wanted to do was extract some capital. I still believe in Tesla. I still believe in CEO Elon Musk, but trading is a mercenary game, and this was opportunity knocking.

Tesla, in a filing with the SEC, revealed a plan to raise $5 billion in capital, selling common equity “from time to time” and at “at the market” pricing. The is the third capital raise of the year for Tesla and the second since September, which also amounted to $5 billion. Tesla has entered into an equity distribution agreement with several high profile Wall Street banks, to include Goldman Sachs (GS) , Citigroup (C) , Credit Suisse (CS) , Morgan Stanley (MS) , and others. The lead underwriter will be Goldman Sachs, however, a firm that upgraded Tesla just last week. Is the plan dilutive? A little. At its current market cap, the number of shares sold could approach 7.8 million, or roughly 0.8% of the total of shares outstanding. So… not terribly dilutive.

So why sell with the intention of buying back later, Sarge? Good question. I am counting on key reading algorithms to be a little less intelligent than the human brain, and this my friends… is no sure thing. They are closing the gap all of the time. Am I up on this little adventure? Sure, but not much. I was thinking five run homer when I made the sale, we may be talking two run double by the time I cover this, well I was long, so buy them back. You know what I mean.

Wedbush highly rated and closely followed analyst Dan Ives thinks the move is a smart one. So do I. We all know that Musk has been talking up a move to Texas from California. We all know that the firm is already in China, and building a factory in Germany. This takes dough, and what is not spent on the business can be spent on the balance sheet. When was Musk supposed to strike? When the shares are soft? He did tell his employees not to get carried away. Remember that one? We could have (sort of) seen this coming. I am mildly surprised that as we approached the opening bell, the shares were only down 3%, and have now recovered somewhat.

This stock is a winner, longer-term, or at least until the name heads on into the S&P 500 all at once on the opening bell on Monday, December 21st. Which means the real out trade might just be the closing bell on Friday, December 18th. So, yes, this name is an investment that happens at least right now, in my opinion to be quite tradeable.

Just an FYI, Ives left his bull cased price target where it was… at a cool grand ($1K). They don’t call Elon Musk “The Money Man” for nothing. He has been the smoothest, most successful individual I have ever seen at raising money when he needs it, and doing it in the most effective way possible. Maybe he’s a little eccentric. Maybe he’s just crazy. Crazy smart. 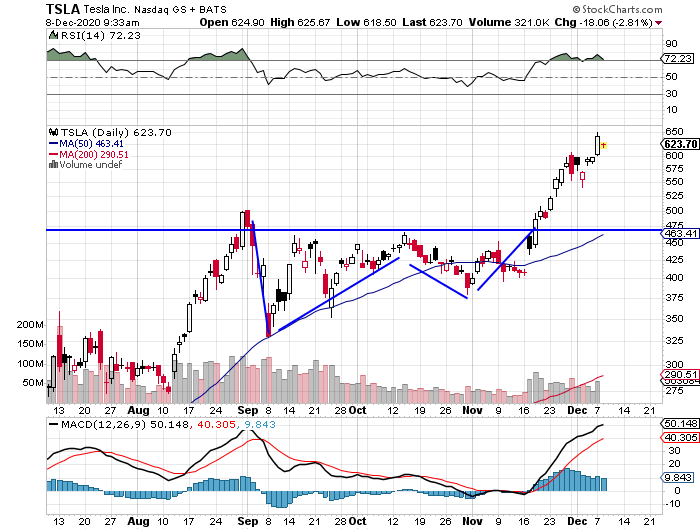 Readers will note that Tesla screamed past our old target price of $559, so these prices were gravy anyway. (We had taken some off at target, we have not become completely undisciplined.) In an ideal world, I would think to start legging back at $615 and drag the whole process down to $550. I would like my “new” net basis to land around $585, which will have allowed me to pull more than $50 out of each share.

As we know, everyone has a plan until making contact with the enemy. That said, let’s rock.

QuantumScape’s Battery Technology Is Huge for EVs. Here’s a Primer.

Toyota teases an electric SUV that will launch in 2021