While no sell signals have appeared on the charts to date, investor sentiment levels and extended valuation continue to suggest the market’s shock absorbers are very weak, leaving the markets vulnerable to any unforeseen negative news.

The indices closed higher Thursday with mixed internals on the NYSE and Nasdaq on light trading volume. The only technical event of note generated was the MidCap 400 (see below) posting another new all-time closing high. 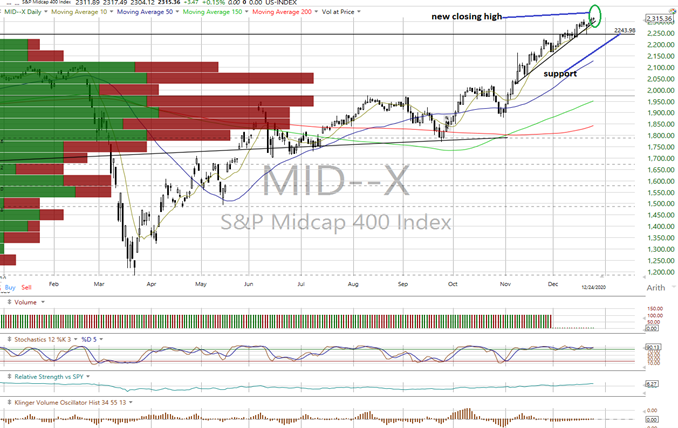 Market breadth remains positive with the cumulative advance/decline lines for the All Exchange, NYSE and Nasdaq in uptrends and above their 50-day moving averages.

We have yet to see any notable sell signals generated. As such, the charts remain generally constructive.

The Data Have Yet to Change Their Tone

While the one-day McClellan Overbought/Oversold Oscillators remain neutral on the All Exchange, NYSE and Nasdaq (All Exchange: -2.92 NYSE: -8.27 Nasdaq: +0.48), the psychology data and valuation continue to imply the markets are on thin ice should some unexpected negative news hit the tape.

The Open Insider Buy/Sell Ratio is neutral at 27.1 but remains in a negative downtrend as insiders have consistently been sellers within the rally.

Last week’s Investors Intelligence Bear/Bull Ratio (contrary indicator) saw little change at a bearish 17.2/63.6 as advisors remain at historically high levels of bullish sentiment. The AAII Bear/Bull Ratio saw little change at 25.28/46.84 and remains near peak levels seen over the past decade as well. New data for those measures will appear Tuesday.

The tug-of-war between the charts and data remains a stalemate, in our view, causing us to maintain our near-term “neutral” outlook. It will be interesting to see how things progress after Santa leaves the building.

Silver Price Daily Forecast – Resistance At $26.30 Is A True Wall On The Way Up