Suddenly…okay, maybe not so suddenly. The Energy sector has been as hot as it gets for a few weeks now. The Energy Select Sector SPDR ETF (XLE) ran 28% for the month of November, ran 4.4% last week, and 8.7% the week prior. Chevron (CVX) is the last name in this space still left in the Dow 30, Exxon Mobil (XOM) having been jettisoned back in the summer. Both names remain, at least for now, dividend aristocrats. Both names underperformed the sector in November, Exxon Mobil significantly more so. However, Exxon Mobil has started to outperform Chevron over the past couple of weeks. Investor interest has been sparked perhaps by recent news, activist investor type news that comes with a twist. Let’s dig in.

News has come to light that the Exxon Mobil Corp is potentially facing a proxy fight brought forward by “Engine No.1”, a newcomer activist investor with an interest in ESG style investing. Engine No. 1 launched with $250 million under management which is not gigantic, but relies more upon founder Chris James and his personal wealth to focus on impact investing. Oh, and Engine No. 1 has the support of the California State Teachers Retirement System (CALSTRS). CLSTRS, itself has a $300 million equity stake in XOM. What Engine No. 1 wants is simple. The activist investor wants the firm to remake itself more quickly than it was doing.

Engine No. 1 sent a letter to Exxon Mobil, calling on the energy giant to make four primary changes. Engine No. 1 wants Exxon to…

1) Add independent directors with diversified experience in the field.

3) Create a new plan to invest in growth areas such as renewable energy.

At least part of the plan includes refocusing investment in such a way as to have little negative impact on the dividend, which is currently $3.48 annually. At Friday’s closing price of $41.68, the dividend yields an incredible 8.4%, which even if halved, remains attractive after the initial fallout in my opinion. Actually, I would almost prefer that XOM did cut the dividend in half.

This morning, more news breaks regarding this still new activist investor. Engine No.1 has now announced the intention to nominate four highly qualified, independent candidates to the Exxon Mobil Corp’s Board of Directors in connection to the 2021 Annual Shareholder Meeting.

Not surprisingly, and simultaneously, the California State Teachers Retirement System, the second largest pension fund in the U.S., has announced support for the candidates put forth by Engine No. 1.

I have not been in energy at all of late. After a long career that included trading oil stocks rather successfully, I found that over the past almost two years that either the sector, or I had lost “touch”… perhaps a bit of both. It became clear that investment in fossil fuels was getting lonely. Younger managers and ESG style managers would not invest in the space, creating a bit of a vacuum on the demand side across the financial markets. This came as production took stockpiles well above “normal” levels, and then the pandemic took the consumer and industrial customers’ demand out of the real world market for the commodity.

The stocks became much lower priced, but not really cheap when size and sale of operations, as well as debt versus cash flows are factored in. Is it time for some exposure? It might be, and if Engine No. 1 has their way, Exxon Mobil might find favor with managers who may not have invested in the name otherwise. 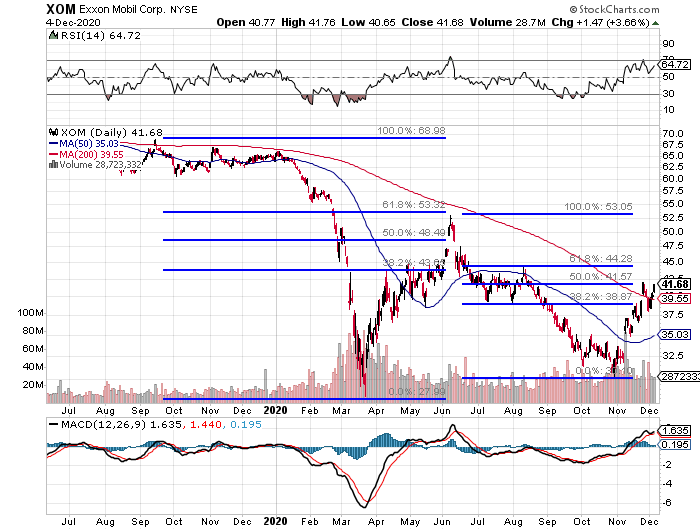 One will note the almost perfect 61.8% retracement of these shares that topped out in June after selling off from September 2019 through March 2020. Now, the shares have sold off from that peak through late October. The shares have just taken and then passed a test at the 200 day SMA, now $39.55. The next test could come at a 61.8% retracement of this selloff, which would be at $44.28. My plan, that I expect to implement in very small steps, is to initiate on weakness. We may see that today. I would be willing to buy the name down to that 200 day line, and if all works well, add on momentum above $44.28 level.

In fact, I think the idea of writing $39 puts expiring January 22nd for well more than a dollar, looks interesting. That said, this is a dividend name, so building equity will be important, and writing puts increases equity risk at a discount… but does not guarantee any equity position at all. The prospect may line your pockets once. Dividend investments do that four times a year.

Is Costco Good For Mortgages?